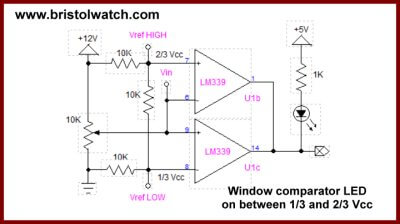 A window comparator will output a voltage between two selected voltage points and be off outside that range. In Fig. 1 we have used 2 of 4 comparators in a LM339. The outputs of the each comparator in the LM339 is a open collector transistors tied together and connected to a LED and resistor. This open collector arrangement allows one to use a separate power supply form the rest of the circuit.

The rule for open collector comparator is both comparators must be turned OFF at the same time to output a HIGH. in Fig. 1 we use three 10,000 ohm resistors in series that produces 2/3s Vcc at Vref HIGH and 1/3 Vcc at Vref LOW.

Thus the LED in Fig. 1 is on between these two voltages of 4V and 8V.

Because each LM339 comparator is nothing more than an operational amplifier we can use a LM358 and do the same thing as Fig. 1 other than the output is 12-volts fed into two transistors Q1 and Q2. We use both a non-inverting and inverting comparators together. Vin is TP1.

Above is the logic table for the window comparator circuit at different voltages at Vin. Output transistor Q3 is turned on by the 10K pull up resistor when both Q1 and Q2 are turned off at the same time.

A Hall sensor in its most basic form is an analog integrated circuit. It consists of a Hall plate that outputs a "transverse" voltage based on the intensity of a magnetic field - polarity is dependant on magnetic polarity.

It also consists of a high gain differential amplifier because the generated voltage is small. The output voltage is analog usually centered around half the power supply voltage.

The addition of a Schmitt trigger with a properly set hysteresis will create a Hall switch or Hall latch. They often have an open collector output transistor.

The Schmitt triggers used here are based on an analog comparator. These can be built from operational amplifiers (op-amps) like the LM358 or LM741.

Often considered "digital" at this point we have in reality a one-bit analog-to-digital converter.