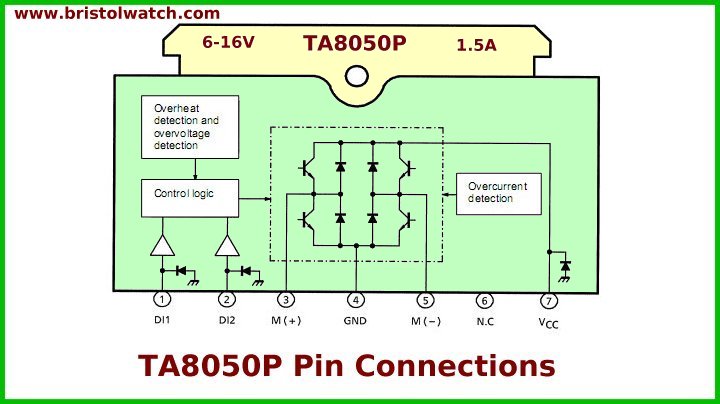 The purpose of this tutorial is the demonstrate using the ATMEGA168/Arduino to control the speed and direction of a 12 volt DC using an "h" bridge.

We will make use of pules-width modulation (PWM) to control motor speed. In this case we are using Toshiba TA8050 integrated circuit and a home-built "H" bridge using power MOSFETs.

An H-bridge is an electronic circuit which enables a voltage to be applied across a load in either direction. These circuits are often used in robotics and other applications to allow DC motors to run forwards and backwards. H-bridges are available as integrated circuits, or can be built from discrete components or even relays and manual switches.

Pulse-width modulation (PWM) is a very efficient way of providing intermediate amounts of electrical power between fully on and fully off. A simple power switch with a typical power source provides full power only when switched on.

This goes beyond mere thermostats that cycle on and off at very slow rates. An inexpensive solid-state lamp dimmer controls the amount of time each AC half-cycle (120 Hertz) is on. See Basic Triacs and SCRs

In the past, when only partial power was needed (such as for a sewing machine motor), a variable power resistor (foot-controlled; a rheostat) connected in series with the motor adjusted the amount of current flowing through the motor. Part of the power was wasted as heat in the resistor element. Auto transformers could be used but are costly. 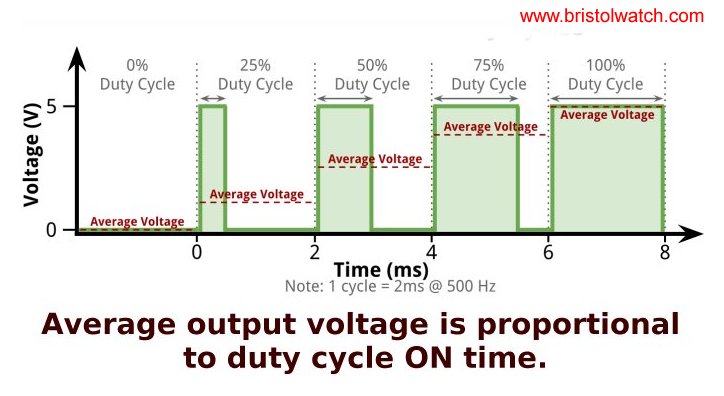 The term duty cycle describes the proportion of on-time versus off-time. Duty cycle is expressed in percent, 100% being fully on 0% is fully off.

In the example below the motor would run somewhere around half-speed without wasting half the power as heat if we had used a variable resistor in series. See Q1 in schematic below. 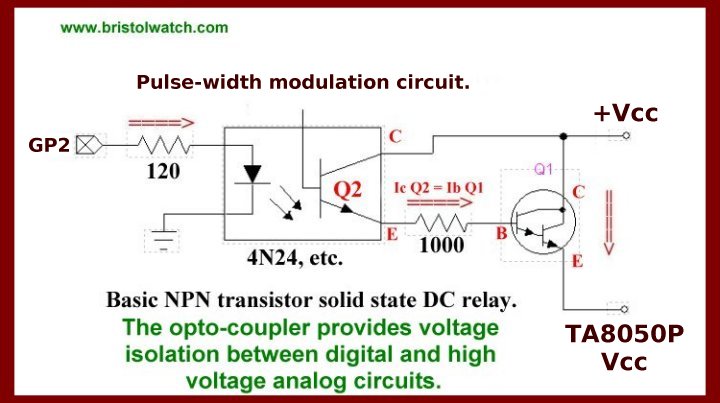 PWM works well with digital controls because of its on/off nature. Finally a simple resistor/capacitor low pass filter on the output pin will produce an analog voltage of 0 to 5 volts depending on duty cycle.

You do not need to call pinMode() to set the pin as an output before calling analogWrite(). The PWM outputs generated on pins 5 and 6 will have higher-than-expected duty cycles.

This is because of interactions with the millis() and delay() functions, which share the same internal timer used to generate those PWM outputs.

Shown above is the TA8050P a 1.5 A motor driver that directly drives a DC motor. Inputs Dl1 and Dl2 are combined to select one of forward, reverse, stop, and brake modes. Since the inputs are TTL-compatible, this IC can be controlled directly from a CPU or other control system. The IC also has various protective functions. See TA8050P 'H' Bridge Motor Controller